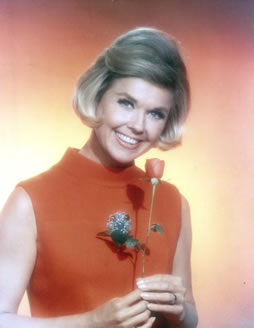 Doris, the quintessential all-American girl, continues to be revered by her fans, while the media still celebrate her as an actress and singer with a legendary Hollywood “girl next door” image. Of her 39 films, Calamity Jane, Love Me or Leave Me and Pillow Talk still remain popular favorites, and run frequently on cable television.

Along with her success on the big-screen, Day recorded a series of excellent albums between 1956 and 1968, which only expanded her popularity, and are as relevant today as they were when they were first released.

Born Doris Mary Ann von Kappelhoff on April 3, 1922, Doris was the youngest of three: she had two brothers, Richard, who died before she was born, and Paul who was a few years older. She was named after silent movie actress Doris Kenyon, whom her mother admired.

Growing up in the 1930s, Doris was drawn to music and dance, eventually forming a dance duo that performed locally until a car she was riding in was struck by a train, crushing her right leg, a severe injury that curtailed her ambition to become a professional dancer. While recovering, her mother encouraged her to take singing lessons from vocal coach Grace Raine. Doris credits Raine with impressing upon her the importance of delivering a lyric, and today Doris says that Raine had the greatest impact on her singing career. 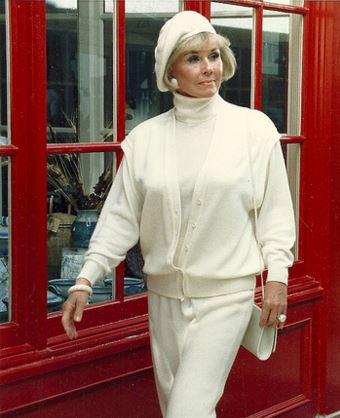 Among the many accolades showered on Doris over the years, her leading role in Pillow Talk garnered her a Golden Globe and a Best Actress Nomination and her signature song “Que Sera, Sera” won the Oscar for Best Song for Alfred Hitchcock’s “The Man Who Knew Too Much” in 1956. Doris was voted top Box Office Female Star for four years straight during the early ’60s and was she among the Top 10 for 10 years straight. Her record has never been matched. More recently, Doris received the Presidential Medal of Freedom by George W. Bush in 2004, and was awarded a Grammy for Lifetime Achievement in 2008.

Since leaving the Hollywood spotlight more than 30 years ago, Doris has turned her attention to a second career with the same enthusiasm and energy that put her at the top of the entertainment world: the welfare of animals. 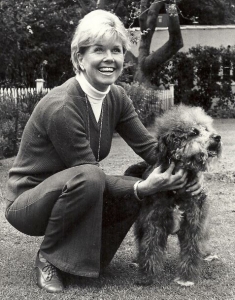 Through a veterinarian friend, a beautiful Maltese named Duffy put behind him a life of abuse, neglect and found a home with Doris, who had recently lost her little white dog. Millions of dogs in the United States aren’t as lucky as Duffy Day. Treating their special needs, whether they are medical, behavioral or social, requires a commitment of time and resources far surpassing what humane societies can currently afford. Many animals don’t get the second chance at life they so richly deserve.

To spur change, Doris founded the Duffy Day Lifesaving Program, directed at turning our attention to saving senior animals in need medication for the rest of their lives. This will ensure many more happy endings like Duffy’s. Secure donations to Doris’s Foundations can be made at at http://ddaf.org.

Today Doris enjoys a quiet life at home in the Carmel Valley, California. She prefers to stay out of the spotlight and instead keeps busy caring for her animals and her beautiful home and grounds, as well as reading and answering hundreds of pieces of fan mail she receives each month. She tends to the affairs of the Doris Day Animal Foundation and has projects ranging from the release of a new CD, a new website (www.dorisday.com) and a paper doll book, and she promises that new ventures are in the works.

Read a tribute to Doris Day.

A friend's tribute to Doris Day

With heavy hearts, we share the news that Doris Day passed away peacefully this morning at her home in Carmel, Calif. She had just celebrated her 97th birthday on April 3, and many of you attended birthday events and sent your best wishes from around the globe. She delighted in hearing from you! She was in good physical health to the end, and we are so grateful she was surrounded by friends as she passed.

The world has lost a light today. Doris was not just a darling of song and screen, but a close friend, an inspiration when the world seemed bleak, and a dear, compassionate advocate for her favorite beings on Earth: the 4-leggers.

Her life’s work — her music, her films, and her animal advocacy — comprise an enduring legacy. Fans will continue to laugh at her romantic comedies, admire her dramatic grit, marvel at her pitch and interpretation of so many great, songs. She redefined what it meant to be a girl singer with a Big Band, and she broke the mold for Hollywood starlets. And for so many fans, young and old, the name Doris Day will always make us smile.

Doris’ passionate work on behalf of dogs, cats, horses, sea lions, raptors and other animals in need of rescue, veterinary care and adoption will not end. The Doris Day Animal Foundation is committed to continuing its work as a grant-giving organization, funding smaller animal welfare non-profits across the country.

As you remember Doris today, give a thought to the animals she cared for so deeply. Memorial contributions in Doris’ honor can be made by clicking this link: https://www.dorisdayanimalfoundation.org/donate

While we grieve Doris’ loss, we at DDAF also honor her leadership of more than 40 years. She was truly a voice for the voiceless among us, a bright and beautiful champion for the cause of animal welfare, and a dear, dear friend to us all.

“Probably the most famous dog-friendly hotel in the country, the Cypress Inn is co-owned by actress and animal activist Doris Day. And even without its pet pedigree, it’s an appealing Mediterranean-style inn dating to 1929.”  – Sunset Magazine

Explore Carmel and Beyond!

Monterey County offers iconic California experiences by highlighting everything that’s best about the Golden State. There are few places on earth as incredibly dynamic and picturesque, with its rugged coastline, beautiful beaches, inland vineyards, world class golf courses and quaint seaside villages. There are dozens of memorable activities, both indoor and out, which cater to every taste and age. It was difficult narrowing our favorites to only ten, but here are the absolutely “don’t miss” vacation experiences for a trip to Carmel-by-the-Sea.

Monterey Bay Aquarium & Cannery Row
One of the world’s best aquariums is a “don’t miss” for the whole family!

Wine Walk Carmel by-the-Sea
Leave the car in park and enjoy a superior wine-tasting experience on this self-paced, self-guided stroll to tasting rooms.

Explore the rugged Central coastline with a drive to Big Sur
Walk on the purple sand at Pfeiffer St. Beach, featuring an 80-foot waterfall that drops from granite cliffs into the ocean from the Overlook Trail.

Shop ‘til you drop!
Explore the chic boutiques, antiques and galleries in the European-style seaside village of Carmel by-the-Sea.

Let the day go to the dogs!
An afternoon run on Carmel’s beautiful “leash-free” beach is sure to build up a thirst, to be quenched at “Yappy Hour” where you’ll mingle with locals and visitors alike at Cypress Inn’s pet-friendly “Terry’s Lounge”, co-owned by legendary screen star Doris Day. Mutt-tini, anyone?